The Limitations of Science

Science is the true cornerstone of modernity. More specifically, empirical science, the method of testing theories with data, established the Enlightenment and the modern world. Though reason, at least in the form of mathematics and deductive logical thinking, is also important for the modern worldview has a considerable deficiency. For all its worth, logical reasoning lacks the ability to verify or reject initial assumptions. Though the mathematician Godel proved this in the early 20th century, the issue has been apparent for centuries. For example, Aristotle's model of physics placed the Earth at the center of the universe. Upon this premise, he argued that everything in the universe has a “natural place” which in turn is why solid objects fall i.e. gravity or why birds fly. Aristotle's model of physics was finally overturned by Galileo, who tested Aristotle's claims and found almost all of them to be false. Aristotle's reasoning was arguably sound, it was accepted for centuries at the very least. However, the premise he used for the basis of his reasoning was wrong and was only conclusively rejected with empirical science.

The power and utility of empirical science is undeniable, humanity enjoys the benefits and creations of science in many areas of life. It is understandable that the modern worldview elevates science to the high pedestal as the ultimate means of determining truth. Naturally, the strength of empirical science is the validation of hypotheses with observed data. There is an often unstated assumption that a true theory will always be supported directly with data. However this simply is not true and there are many scenarios where this assumption does not hold. In his New York Times best seller The Black Swan, Nassim Nicholas Taleb illustrates where this assumption breaks down with the turkey problem. Imagine a turkey living on a farm, the turkey is unaware of the tenuousness of its situation. Every day it is fed, spends time with its turkey friends, and each day reinforces the turkey's confidence that life is good. If the turkey's happiness is plotted as a graph, it would be up and to the right.

However, one day the turkey is made into Thanksgiving, its happiness drops to "zero" in a single day. The significance of this thought experiment is that it illustrates that the past does not always predict the future. From the turkey’s point of view, the data of its day to day experience points in the exact opposite of the truth. Its observations do not align with the true nature of its situation. 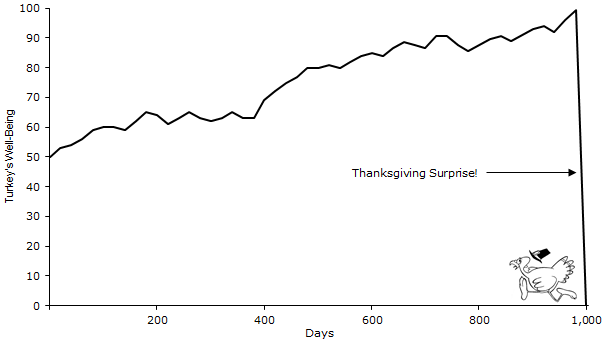 Taleb calls these important though completely unpredictable events "Black Swans." They are sharp changes that have a huge impact with little to no prior indication. Though the turkey thought experiment is a hypothetical, there are many examples of unpredictable events throughout history. The invention of penicillin, the 2008 financial collapse, the emergence of COVID-19, the 9-11 terrorist attacks, World War I, and the black plague are a few examples. Many of the most impactful human inventions are accidental or otherwise unintended. Further, major social-political events were often unforeseen at the time and only retrospectively explained such as the fall of the Soviet Union. It's arguable that most of history is dominated by Black Swans.

What is the mechanism behind these black swans? How can there be such a disconnect between the observations and the underlying truth? The discrepancy is what mathematicians call “chaos.” Chaos theory is a field of mathematics that studies the apparent random behavior of complex systems. One of the principle issues are threshold effects, some phenomena require a buildup before they can occur. The turkey problem is based on this premise, the turkey needs enough growth before it is converted into dinner. Its demise cannot occur incrementally. A real-world example of threshold effects are earthquakes: tectonic plates buildup pressure until they slip and the stored energy is released suddenly as an earthquake. The USGS says there is no way of knowing when or where an earthquake will occur or its magnitude.

The original example that inspired chaos theory is weather forecasting. Edward Lorenz discovered the branch of mathematics of chaos theory by noticing that weather forecast models would produce vastly different predictions when factors such as air temperature, wind speed, humidity, etc were changed by very small amounts. He noticed when a particular value was accidentally changed from 0.506127 to 0.506 the forecast system made entirely different predictions. The consensus of the day was that such a small difference could not have a noticeable impact on the predicted outcome. Even with just a dozen factors considered, the complexity of the weather model resulted in dramatically different forecasts when small adjustments to its inputs were made. He concluded that predicting the weather more that two weeks in advance would be completely unreliable because of the chaotic nature of the weather.

Another particularly important example are neurons. A single neuron accumulates electro-chemical signals until it reaches a threshold for firing. Neurons are networked together in a brain with the output of some neurons becoming the input for others. This makes the behavior of the whole brain a chaotic cascade of firing neurons, since each neuron is a threshold which in turn depends on a multitude of other neurons' thresholds firing. A human brain contains billions of neurons with many times more connections. The complexity of the human brain is astonishing, it is debatably the most complex object in the universe. If earthquakes and the weather are chaotic and unpredictable, understanding how the brain works may always be beyond human comprehension.

The effects of "chaos" are widespread, and segments of most scientific fields are affected by chaotic dynamics. The effect of thresholds and other chaotic mechanisms fundamentally cause two problems for scientific empiricism. The first is that if a system has threshold effects in its behavior, the association between cause and effect can be difficult to determine since the effect can be delayed, can be highly contingent on other factors, or is otherwise sensitive to small changes.

The second issue is with mathematical representation. Modeling chaotic systems is also problematic since data is used to estimate key parameters, small errors in estimation can result in wildly different predictions. This sensitivity makes the predictions difficult to validate, and comparing competing models becomes next to impossible. If small errors in parameter estimation cause vastly different predictions, it becomes difficult to determine whether the erroneous predictions are due to the model being fundamentally wrong or due to errors from estimation. Comparing theoretical models against data is the premise of empirical science, though chaos brings the validity of this approach into question.

These issues undermine the premise of empirical science i.e. testing theoretic models with data. These chaotic systems obfuscate the connection between observation with the underlying mechanism. Empiricism can not be naively trusted to determine what is and is not true.

There is a larger implication of chaotic systems since there is a decoupling of observation versus the truth and that is of falsification. Karl Popper was a philosopher of science who promoted the idea of falsification as the basis for science. He stated that in science there are only two kinds of theories, those that have been proven to be false and those that have not yet proven to be false. Empirical data can only act as a counter example, discrediting theories that do not conform to it. However, if a theory does match the evidence gathered thus far, there is no guarantee that later new evidence will arise and show it to be false, this is known as "the problem of induction."

The problem of induction is an even greater issue if there are contradictory theories that match all observed data. That was the heart of the controversy surrounding Galileo. Both theories of heliocentrism and geocentrism were in total agreement with all the astronomical data gathered at that time, however geocentrism was backed by the church supported scientist Tycho Brahe. Hence the conflict was settled as a religious issue by the Catholic church, though of course Galileo was later vindicated.

Now if the data in the turkey problem is misleading due to a single threshold effect, observations of the complexity of the human brain will be extremely difficult to decipher. The data is likely to be inconclusive and remain inconclusive despite researchers' efforts. When should researchers give up and accept the second theory? Given the complexity of the human brain, it is always justifiable to gather and analyze more data. If the theory of unintelligibility is true, the researchers will never find data to justify the first theory. They will keep gathering more and more data, running more and more experiments. The modern worldview elevates science as the ultimate way of determining truth, however this infuses a bias towards explainability. If the second theory is true, they will be forever searching to justify the first theory. There is effectively no way to differentiate between "can not know" and "do not know yet." It is also worth noting that a system as highly complex, interconnected, and chaotic as the brain is arguably the very definition of unexplainable.

Taleb's turkey problem succinctly illustrates that empiricism does not necessarily determine the truth. This is an illustration of a threshold effect, a type of chaotic behavior that obscures the connections between observations and an underlying mechanism. The modern worldview is built upon the foundation of empirical science as the primary means of determining truth, however this is undermined completely by chaotic nature of many natural phenomena. The view that science will inevitability discover every law and truth regarding the universe is simply false.

Next: The Value of Human Experience & The Test of Time